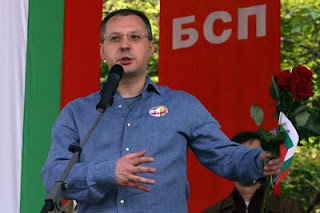 Bulgarian Prime Minister Sergei Stanishev stressed the importance of his country in stabilizing the surrounding regions and shaping Europe’s new energy policy in a speech at the Harvard Kennedy School last night.

During the lecture, entitled “Bulgaria as a Stabilizing Factor in Southeast Europe and the Black Sea Region,” Stanishev called for regional cooperation and further Euro-Atlantic integration in ensuring the stability of the two regions.

Stanishev said he was proud with the progress his country has made over the last decade and that he vowed to continue this trend in the future.

“I’m very glad as a Bulgarian,” Stanishev said. “In recent years there’s been a real change in our region.”

However, some members of the audience said they weren’t as optimistic about Bulgaria’s current status during the speech’s question and answer portion.

“If there is no free speech, are you to be trusted that Bulgaria is a democracy?” asked one Northeastern student, who came to the lecture with a sign saying “Meet PM of the most corrupt EU country.” Transparency International—an organization that monitors corruption—globally ranks Bulgaria 72nd, below all other countries in the European Union.

Stanishev responded by citing the overall improvements in Bulgarian society, including its three-party coalition and its rapid increase in foreign direct investment.

“I think he answered the questions reasonably. I thought he was a very practical and intelligent guy who does a great job,” said Nnamdi D. Okike, a student at both the Harvard Business School and Law School.

However, Vessela Hristova, a teaching fellow in the government Department who is from Bulgaria, said she thought otherwise.

“It was his usual propaganda,” she said. “A lot of people are not really specialists in the region, so it flies if he spins questions around.”

“How can he be here and rave about how great the conditions are if the Bulgarian students don’t want to return back?” asked another Bulgarian, Rositsa P. Atanasova from the Divinity School. “They don’t think there’s anything for them to do there, the conditions aren’t ripe enough,” she said.

Bulgaria ranks fifth among foreign countries in the number of students it sends to Harvard.

Stanishev came to Cambridge for two days after spending four days in New York, where he took part in the 63rd session of the UN General Assembly.

The event was sponsored by the Kennedy School’s Kokkalis Program on Southeastern and East-Central Europe and co-sponsored by the Minda de Gunzburg Center for European Studies.