(Можете да го направите тук.)
On May 20, Iceland announced that it would allow 40 minke whales to be killed over the next six months. This is in open defiance of the commercial whaling ban that the International Whaling Commission implemented in 1986, and a reversal of the country's decision in 2007 to halt this brutal practice. 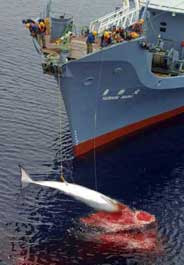 Today, when whales face so many other threats--global warming, pollution and ship strikes--and whale meat is no longer even in demand, there is simply no justification for any country to continue hunting whales. People around the world know that Iceland, Norway and Japan are the “whaling nations”; this identification is a black mark against Iceland and Norway’s “green” reputations and makes an otherwise ultra-modern Japan look backward.

The killing has already begun, with at least one minke confirmed dead in the first week. Please write to Iceland’s fisheries minister, Einar Kristinn Guðfinnsson, and tell him to end Iceland's whale hunt once and for all. Instead, Iceland should concentrate on promoting whale watching as a humane and eco-friendly alternative to killing whales. Environmentally, Iceland is a world leader on the renewable energy front; this, in contrast to its continued destruction of wildlife, makes no sense.

Please remember to tell your friends and family how they can help, too. We need to send a message to the Icelandic government that the people of the world are against whaling and will not stand by while more whales are killed and left to rot in freezers.
етикети: не ги убивайте