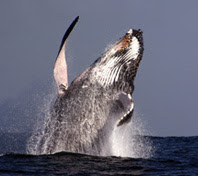 On November 18, Japanese whaling vessels set sail for Antarctica amidst great fanfare, in stark contrast to the outrage felt by most of the international community. Take action now to stop the hunt.

Defying international agreements yet again, Japan has publicly announced its intentions of taking 935 minke whales, 50 fin whales and, boldly, 50 endangered humpbacks in the hunt. Humpbacks, a favorite of whale watchers everywhere, have not been hunted industrially since the mid-1960s; in the past, their populations fell by an estimated 90 percent before these hunts were finally banned.

Humane Society International is asking Japanese Prime Minister Yasuo Fukuda -- new to office as of September 26 -- to start his tenure on a note of compassion by putting a stop to this needless slaughter.

Please add your voice to those calling for an end to the brutality of whaling. Ask the prime minister to take a leadership stance for conservation and animal protection, to recall the whalers and to stop killing these majestic creatures.

Remember to tell your friends and family how they can help, too.

Thank you for all that you do to help animals!
етикети: не ги убивайте